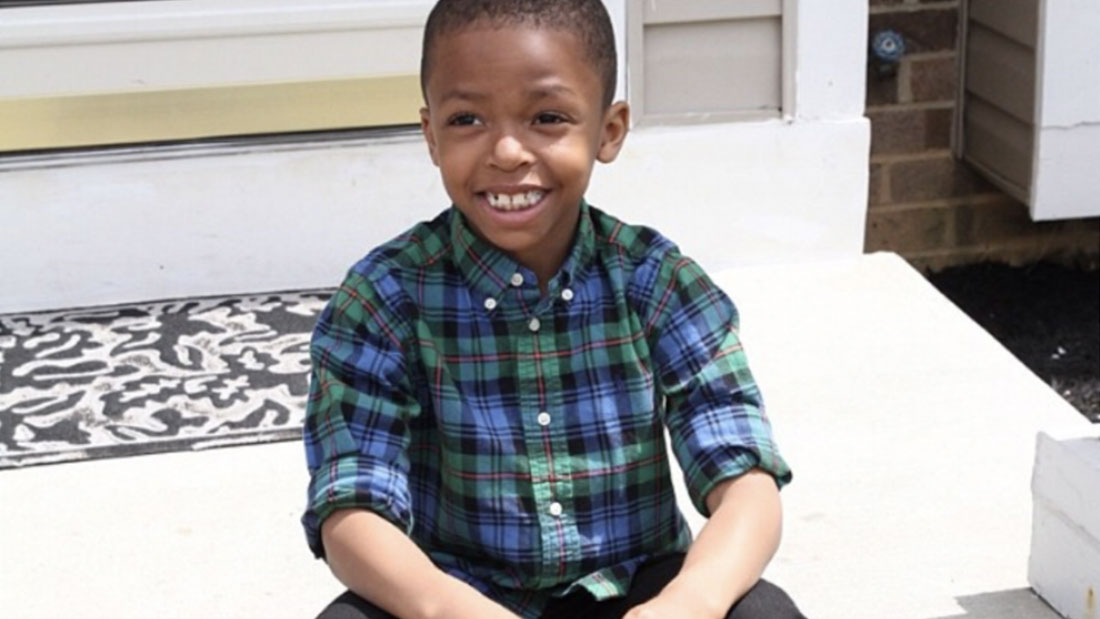 Posted at 09:05h in Family by The Funny Momma 3 Comments

My life has never gone as I imagined it, but oddly enough that’s the best part about my life. I’ve always wanted a large family because I came from such a large family. Both my mother and father have five siblings each, so I have over 30 first cousins (it’s safe to say that secret santa is a must in my family). Anyway, I always wanted to have two boys and two girls- in that order, but things didn’t quite play out that way. I ended up with three snotty nosed, bad-ass boys; two that I birthed myself and one that I was blessed to have in my life without earning additional stretch marks.

CJ’s (my first-born) 5th birthday party was the first time I met my bonus baby, Elijah. He was 4 years old and cute as a button. His dad and I had been dating for about 4 months and thought this would be the best way for the boys to meet. The two main things I remember about Elijah is how extremely shy he was and how well he followed directions. This kid would not make a move without asking first. Can I go in the backyard with the other kids? Can I take off my Batman cape? Can I have another sip of water? Meanwhile CJ’s swinging upside down from a tree in his freakin underwear with a pixie stick in one hand and a Twizzler hanging out his mouth. They were and still are, polar opposites. 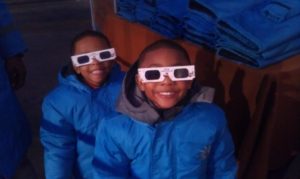 In the beginning, CJ irritated the shit out of Elijah and Elijah bored the shit out of CJ. CJ always wanted to dance battle, talk about Star Wars characters and would prank Elijah on a regular basis. Elijah just wanted learn football, watch football and play football without being bothered. It was a constant struggle to get the both of them in one room without arguing or a full-blown death match. It was a complete mess and there were times I truly didn’t know how we were actually going to blend our blended family. All I could do was encourage them to recognize each other as family and pray. I prayed a lot. 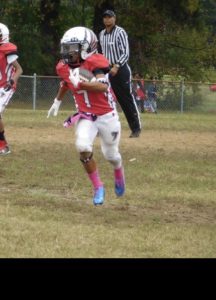 As the years went on, I noticed subtle changes in their personalities and their relationship. Elijah became sillier and let his guard down and CJ was a bit more refined and calm. It’s like they balanced each other out somehow. The great part of it all is that their differences have never stopped them from bonding. It took some work but they now treat each other as if they’ve been acquainted since they were born. They talk about girls, argue about whose Minecraft world is more advanced and pretend to fight in slow motion for hours. It’s incredible to watch as a mother, but extremely irritating to watch as a human being. 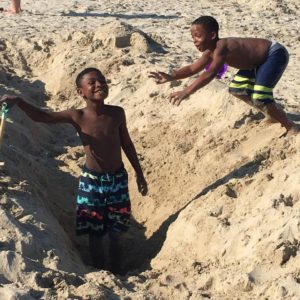 It took a while for Elijah and I to build a strong relationship. I love hugging and cuddling with my kids, but he was not having that shit. It was so bad that if I needed to hold his hand to cross the street, he would stretch out his hand like a fucking starfish so that it was nearly impossible for me to hold. Whenever I would say “See you later. I love you,” he would quickly run out of the room as if he had farted and didn’t want anyone to know. Our conversations were very short and awkward for at least the first year and I could barely get him to look me in the eyes. I often questioned whether or not I had done something that upset or offended him. After some time I realized that he wasn’t standoffish towards me because of something I had done, he was just a very guarded child and it took him some time to warm up to me.

The toughest obstacle we have had to face is my lack of sentiment for personal injuries, which tend to bring the dramatics out of an otherwise drama-less Elijah. I would consider myself a more laid back, I don’t take my kid to the doctor unless it’s for an annual exam or their arm is falling off type of mom. You see, I was raised by a Mexican mother who taught my sisters and I that nearly any injury or illness can be cured by drinking water, putting on Vicks Vapor Rub and/or pooping. Dayo, my husband, is more of the OMG he’s coughing so he either has swine flu or anthrax type of dad. So as you can imagine, our children react very differently when they are ill or coming down with something. Here’s a perfect example:

One day, Dayo, my father-in-law, CJ and Elijah went to the gas station. My father-in-law and Dayo went inside and left the boys in the car. CJ, the prankster, removes the cigarette lighter from the car, presses it on his finger and tells Elijah that he is so strong that the heat from the lighter doesn’t bother him a bit. He puts the lighter back in the port and dares Elijah to do the same. What he didn’t realize was that he accidentally turned the lighter on. Elijah, never one to back down from a challenge, accepted. He pulled the lighter out, pressed it to his finger and stuck his tongue out at CJ. A split second passed and both boys noticed smoke coming off of Elijah’s finger. In CJ’s words, it “smelled like a burnt chicken nugget.” This bozo had burnt his finger.

Elijah immediately drops the lighter, jumps out the car and runs frantically over to his father He’s screaming bloody murder and dramatically drops to his knees on the gas station asphalt. Dayo attempts to pick him up but Elijah proceeds to lay on the ground yelling out for “someone, anyone” to help him. Dayo can’t understand what Elijah is saying through his screaming and tears so CJ comes from behind, desperately trying to hold back his laughter and explained the situation.

I’m at work, minding my own damn business, when I get a call from my husband that went a little something like this:

I hear Elijah in the background wailing in agony and screaming that he needs to go to the hospital immediately.

At this point I’m thinking the worst.

“Yes! On the cigarette lighter! What do I do?!? Should I take him to urgent care?!?”

“It’s soooo bad though! Call you mom and ask her if I should take him to urgent care.”

“Hey mom. So Dayo is freaking out because Elijah burnt his thumb on a cigarette lighter. He wants to know if he should take him to urgent care.”

“His thumb? He burnt his thumb?”

“Tell him to put some ice on it and to drink some water.”

I call Dayo back to relay the message and he agreed to put ice on the bandage. I get home from work about two hours later and no one is there. It’s very rare that this happens, so I took the opportunity to get completely, butt ass naked and run a freedom lap around the living room. I then went upstairs to put on some house clothes and got ready to make dinner. Shortly thereafter, I hear the garage door open. CJ walks in first, gasping for air because he is laughing so hard. “Wait til you see this mom.” Dayo comes in and then Elijah walks in behind him WITH HIS ARM IN A SLING!!!! A FUCKING SLING FOR A BURNT THUMB!

Dayo took his ass to urgent care and sat in the waiting room for three hours to see a doctor who gave him fancy petroleum jelly and a freakin sling. Being the caring mother that I am, I did what any other person would do in my situation and laid down on the floor because my legs were too weak from laughter to stand. CJ joined me on the tile and we laughed obnoxiously for at least 20 minutes. This has got to be a joke. But it wasn’t. It was real life. It was my life.

Apparently the doctor agreed that the burn was not that bad however Elijah insisted that the doctor take further action- enter the sling. Elijah made sure to milk the shit out of this whole sling-thing. Whenever he needed to pee, he would get off the couch like a nine month pregnant woman whose water just broke “ah ah ahhhhh. Ooo ooo ooh. Hee hee hee.” Really, dude? He would only drink gatorade and eat chicken soup and whenever we stopped paying attention to him he would whisper “I’m so dizzy” in a faint voice. You have a burn on your thumb, not Polio. Give me a break.

After a long night of tending to Elijah’s every waking need, Dayo and CJ threw in the towel and headed to bed. It was just me and janky thumb Elijah. He wouldn’t make eye contact, wouldn’t really talk to me and just sat on the couch in awkward silence. I then very casually asked him if he wanted to watch a movie and to my surprise- he agreed. That night, Elijah and I had finally discovered something we had in common. We both loved the movie Steel Magnolias! He sat up and watched the whole thing with me! We laughed at Dolly Parton and teared up about Julia Roberts’ character. The next morning I woke up, still on the couch, and he had snuggled up right under my arm. I had to fight back tears of joy because we had finally made a break through.

I’m happy to report that we have gotten to the stage where I say “I love you” and he awkwardly smiles and casually walks (not runs) away- baby steps. He hugs me back when I hug and smother him in kisses and he tells me EVERYTHING that is going on in his personal life from who he’s friends with to who he is crushing on. Although I didn’t birth him and he has an amazing mother already, I still consider him my son not my step-son. The “step” just sounds so formal and sterile and I honestly don’t see him any differently than the two butt heads I actually carried in my womb.

It has been hella tough, but if you’re a step-mom going through the same thing, just try to stick it out. I promise it gets better.

Can any of my bonus mommas relate?