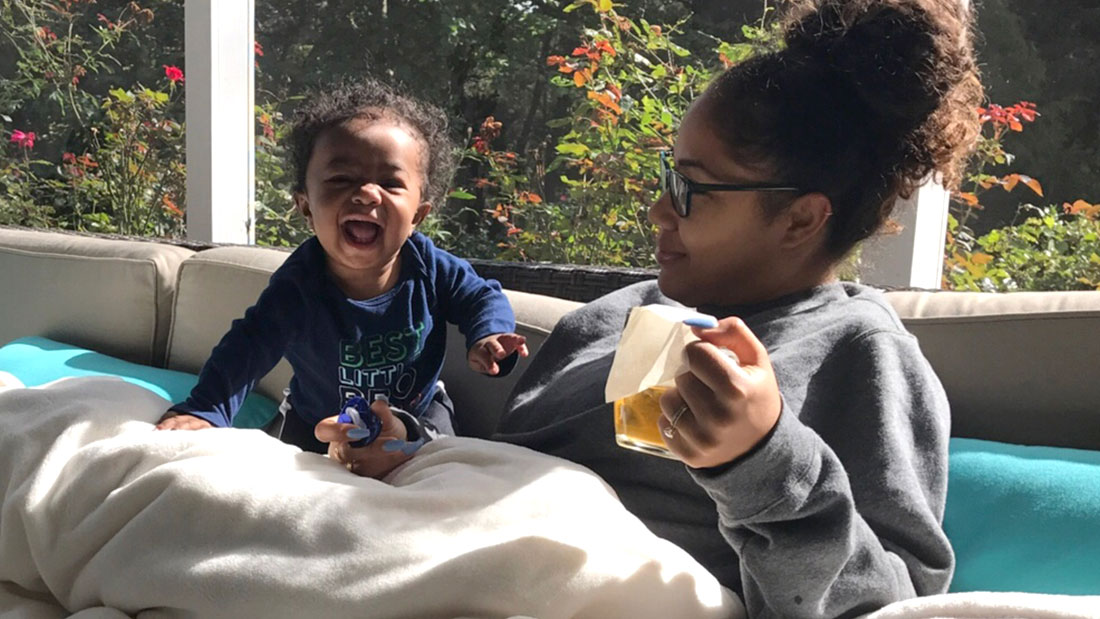 Posted at 14:42h in Mom Life by The Funny Momma 0 Comments

Motherhood is a gift. A gift that I am proud to have received three times. I am grateful and happy to be able to call myself a mom,  however,  there was once a point in my  motherhood journey that I completely lost myself. Below is the story of  what happened and how I discovered myself again.

I was only 19 years old when I had my oldest son, CJ. Looking back on my first pregnancy, I have to admit that my 19-year-old body proved to be waaayyy more equipped to keep up with a baby than my now 30-year-old body. Aside from the fact that my entire family was pissed at me for getting pregnant in the first place- I pretty much had it made. My pregnancy was pretty much a breeze. CJ was the easiest, most relaxed baby EVER. And because he was first grandchild/nephew in my family, everyone always wanted to watch him, so I pretty much always had a babysitter.

Although I was very young, my transition into motherhood was pretty smooth.

Five years after having CJ, I was introduced to Elijah – my bonus baby. Adjusting to this new addition took some time because my now husband/then boyfriend and I were learning how to successfully blend our two families. The challenge was that CJ and Elijah are just 8 months apart in age, so it was basically like raising twins who were polar opposites and barely got along.

The boys were constantly fighting, none of our schedules ever matched up and merging both our styles of parenting was so hard! I’m not gonna lie… there were a few times I nearly lost myself to motherhood during this time in my life but by the grace of God, I kept it together. After A LOT of hard work, we found a routine that worked for both our boys.

Fast forward to five years later when my adorably handsome (yet borderline psychotic) baby boy, Ashton, was born. From the moment I got pregnant with Ashton, I realized this pregnancy would be very different from my pregnancy with CJ. I couldn’t sleep for more than four hours a night, nausea was my best friend and I dealt with terrible back pain as his favorite place to rest was on my sciatic nerve. It was no surprise that when he was born, he took over my entire body, life and soul.

After dealing with and surviving postpartum depression for the first six months that Ashton was alive, I honestly thought that moving forward would be a breeze. I finally got him to sleep through the night (for the most part), I semi-learned how to balance work life/baby life and I had finally got back to the point where I could focus on the rest of my family as well. Along with all of the regular mommy stuff (school, practices, games, band recitals, boy scout meetings, school volunteering), I spent numerous hours a week creating schedules, grocery lists, homework index cards, etc. Basically anything I could do to make me and my family’s life easier and more productive.

. I spent so much time focusing on my family, that I became an afterthought to myself. I think I was so afraid to lose control like I did during my postpartum depression bout, that I felt I needed to organize every single aspect of my family life,  so I would never feel overwhelmed again. Well that was a terrible method of thinking. I was so overwhelmed that it literally started showed on the outside.

I have always been a lover of all things fashion. I’m in no way a fashion guru, but let’s just say I always like to keep up with the trends. Trendy tops, ripped jeans, chic dresses, to-die-for heels; that was pretty much my way of dressing before Ashton came around. I never really noticed that I stopped dressing that way until my sister, Bonnie (Boozin’ with Bon) called me on my shit.

Bonnie- “What are you wearing?”

Me- “Huh? What’s wrong with this” I said as I glanced down at my target sweatpants, Adidas flip-flops, mixed match socks and my husband’s old t-shirt that was adorned with fresh baby throw-up. I really was a fucking messy’all . I literally had no clue how shitty I looked.

Bonnie- “I don’t even know who you are anymore.”

I was still confused.

My mom (never one to be soft-spoken)- “Yeah and your hair looks like a rat’s nest. Those ends are horrendous.”

My baby sister, Zari, always tries to stay neutral. She never really gives her opinion unless you ask. I glanced at her for confirmation that I looked fine and my mom and Bonnie were just trippin’. She couldn’t even make eye contact. It was that bad.

The whole thing turned into a typical Rodriguez women intervention session They read me up, down, right, left, sideways and everything in between. They basically told me that I had become a hermit, I let myself go, I smelled of baby vomit, my eyebrows weren’t even, my nails looked like last year and my new-found personality was boring. After they laid it out that way, I could see where they were coming from.

Side note- I was raised in a very cut throat, no-nonsense and blunt family. If there is an issue, we address it head first. Although this may seem harsh, we dish it because we know how to take it. And we know that the criticism is always coming from a good and honest place.

When I got home that night, I put the baby to bed, told my husband and older boys to leave me alone for the rest of the night, walked into my bathroom and locked the door. I stared at myself in the mirror for at least 30 minutes. It felt like it was the  first time I had actually looked at myself in over a year. Take my word when I say I looked like shit.

First thing I did was took a long ass shower. I washed my hair about three times and deep conditioned it. My legs and hoo-ha looked like Chewbacca and Cousin It were going on a date, so shaved them things up real nice. My underarms looked like a Chia Pet, so I hollered at them too.

After I showered, shaved, washed my hair and finally smelled like a decent human being, I needed to do damage control in my closet. I got rid of all of my maternity clothes (except my maternity bras because they’re too comfy to give up) and oversized clothing that became more of a security blanket to hide the weight I gained, but refused to acknowledge.

The next morning, I headed to my mom’s salon to get a much need haircut and color.  Aside from the fact that I had to hear my mom’s incessant nagging on how embarrassed she was that I allowed my hair to get this terrible, I was thoroughly pleased with how my hair looked. Then I had to hit the nail salon!

I got a gel mani/pedi and splurged $30 extra to get the “Pink Himalayan Salt Scrub” that we all really know is just Morton’s Sea Salt in pink dyed baby oil. I didn’t care that it was most likely a fraud. It felt fabulous. I also got my eyebrows and lip waxed because I was beginning to resemble the Wolf Man.

Next, I went to the mall and walked into one of those shady, Asian massage places you always see, but never go in. They almost look like a place people go to sell organs on the black market. But the way I was feeling, I was willing to risk it all for a $1 a minute massage. And I’m really fucking happy I did because I left that mall feeling completely and utterly relaxed.

Later that day, I had my first irresponsible momma moment and pulled out my credit card – that I had worked so very hard to pay off. I went online shopping and purchased a few additions that would liven up my closet , but not break the bank. Even though I didn’t want to use my card, I didn’t feel bad about it because I was finally doing something for me.

Those two days were INCREDIBLE! Just taking that time to pamper myself had me feeling like a million bucks! I knew that I wanted to have this me time on a more regular basis so I enlisted my wonderful niece, Alaysia, to help me out!  I now pay her to watch my boys each and every Wednesday, after work, so I can run errands, get some alone time and most importantly I can focus on me!

So finally, after over a year of self-neglect, I was back to being myself!  I wanted to share this story with you all because I know that so many times, as a mom, there is so much going on with your children that it can prove to be really, really difficult to make time for yourself. Even if you have to take baby steps; I’m talking waking up a little bit earlier than everyone to get that 15 minutes of quiet or scheduling a weekly manicure during your lunch break! You deserve it Mama!