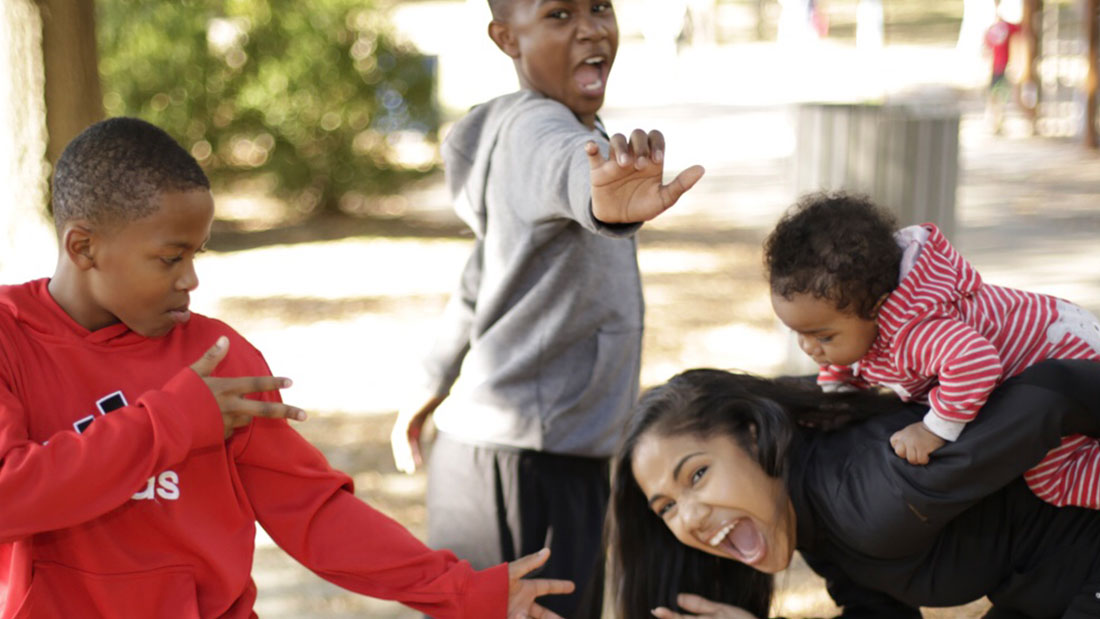 Posted at 09:00h in Family by The Funny Momma 4 Comments

All my life I’ve been around women. My sisters and I were raised by both of our parents. However, they were incredibly busy so a lot of the time we were with our nanny, Maria. I have mostly female cousins and a ton of aunts. I never really knew what it was like to be around boys; let alone raise them. So having three boys (11, 10 and 1) has been a real fucking eye opener.

As I’ve said before, boys are dirtbags. And not just dirtbags as in jerks. Dirtbags as in filthy animals. They also like to risk their lives on a daily basis. Whether it’s climbing trees in Nike slides, running with scissors or riding a bike with one foot on the handles. Boys just thoroughly enjoy giving their mothers serious anxiety and panic attacks. But above all, what my boys love to do the most is fight. And not just like a little tap here and there. I’m talking cage fight, death matches on a regular basis. I know you have questions, so let me explain.

My two oldest boys have come a very long way. Elijah is very competitive but quiet and is a beast on the football field. CJ is outgoing and extremely smart but the poor thing doesn’t have an athletic bone in his body. When my husband and I first introduced our sons to each other, they didn’t quite hit it off due to their apparent differences. CJ is the self-proclaimed “Nerd” – who will steal your girl and Elijah likes us to refer to him as “EP Da Boss Money Warrior”. Do you see why I drink? 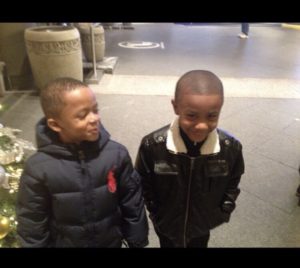 Elijah on the left, CJ on the right.

CJ, to this day, irritates the hell out of his 8 month younger brother. He finds great joy in scaring people; especially Elijah. The first time we took them to the park together, CJ jumped out from behind the slide and scared Elijah. Elijah responded by punching CJ in the nose.

That was the day I knew I was going to have my hands full with these two bozos. 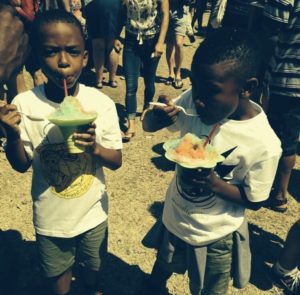 In the beginning, I had to really get used to the constant fighting. CJ would hide behind a door and wait for Elijah to get out of the shower and then WOMP! He’d smash him with a pillow directly in the face. Elijah would get mad, swing and then a fight would commence. Or CJ would just be standing there, minding his own business, when Elijah would come out of nowhere and clothesline the shit outta him and another fight would take place. And we can’t forget about the time that CJ convinced Elijah to hide in the laundry basket with the lid closed so he could jump out and scare whoever came upstairs. Sounded like a pretty funny joke until CJ pushed the laundry basket down the steps… with Elijah in it. That fight was on for the books.

I had convinced myself that the boys hated each other.

Over the years, I got used to all the fighting. I mean, you can only yell and scream for so long before you give up and just start saying “…take that shit upstairs to your room. I don’t have time for you to break anything down here.” My husband would always say “Boys will be boys. That’s just what brothers do. They are building their bond.” Honestly, that just sounded like another dumbass theory my husband had but like I said before, I never had brothers so I really didn’t understand the brotherly dynamic. I just took his word for it and if the tussle got a little too crazy my husband would jump in and split them up. No harm. No foul. 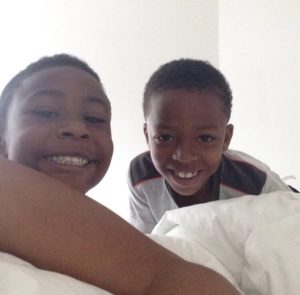 Things had started to mellow down and the boys would actually be excited to see each other when they got home. They would talk about girls, sports and school so I figured they had put the fighting behind them. Well, I was wrong.

One day, while on our way to Target, CJ and Elijah started a good ol’ fashion roast session. They went back and forth between each other with hilarious and not-so-hilarious jokes that had me in tears laughing. CJ was sitting in the front seat and Elijah was in the backseat. It started out very harmlessly until Elijah joked about CJ’s recent “break-up” with his “girlfriend”. CJ demanded that Elijah take it back. Elijah refused and challenged CJ with the words that have started many wars “Do. Somethin. Bout’. It.” Within seconds, CJ turned around and slapped the shit outta Elijah. Before I could react, Elijah had jumped over the front seat and was now wrestling with CJ. Half of his body was on CJ’s seat and the other half was now intertwined in my arms. Please keep in mind that at this time I was actively driving at about 65 miles per hour on the highway.

I was terrified and furious at the same time. I tried everything. I screamed that we were going to crash which had absolutely no effect on them.  I threatened to take away their electronics. Still nothing. I even attempted to move Elijah back to his seat but the more I tried, the stronger he held on to CJ. It all happened so fast that all I can remember is at one point Elijah yelled “He’s choking me!” and CJ screamed “AH! He just punched me in the balls!” HOW IS THIS MY LIFE?!?!?

Finally I managed to pull over to the side of the road. I very calmly turned off the engine, opened my door and got out of the car. The boys were still going at it. I began walking up the street, away from the car and as I walked away I could hear less tussling and arguing. All of the sudden I heard “Mami?” and “Ms. Katryce?” “Where are you going?” To which I turned around, and in the most dramatic way I knew how, I yelled “I QUIT! I QUIT BEING A MOM! Keep the damn car, keep the house and keep the dog! I’m getting the fuck outta here!”

Side note: I don’t usually make it a habit of cursing at my children, but every now and then a bitch loses it.

They were surprised to say the least. At this point they had stopped fighting and tears pooled in their eyes. The tough, macho “men” they were two seconds prior had dissolved away. Now obviously I wasn’t going to abandon my children but ya girl had enough! And I had to make them believe I was done so that we could safely make it to Target cause I wasn’t giving that shit up for anyone.

It was music to my fucking ears. I HAD WON and those two whiny babies had lost their shit. They were now crying hysterically so I took my time before I turned around and came back. I hid my smile because I needed to make sure this never happened again.

Finally I came back to the car. CJ had tears pouring down his face and Elijah had been crying so hard that he was literally forming snot bubbles out of his nose. It was now very still in the car. We all buckled our seatbelts and I quietly turned on the engine. I said nothing to the boys and looked through my phone for the perfect victory song. Nsync’s “Bye Bye Bye” was most fitting.  I blasted that shit all the way to Target. 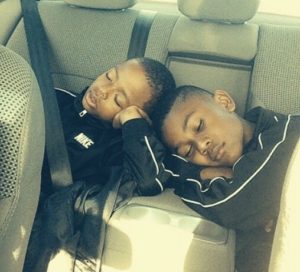 I am happy to report that since then, my boys haven’t gotten in one fight. Yeah, they slap each other around here and there, but it’s nothing like it was before. They love being around each other, always have each other’s back and even refer to one another as “my brother”. I guess Dayo was right. Maybe they just needed to rough each other up a little bit so that, in some weird way, they’d get closer. Or maybe I just put the fear of God in them and this is a just a façade so that I don’t leave them on the side of the road again *shrugs*. 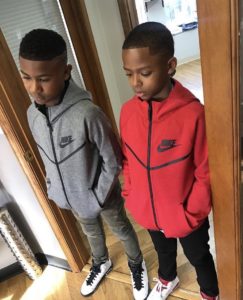 How do you deal with sibling battles?