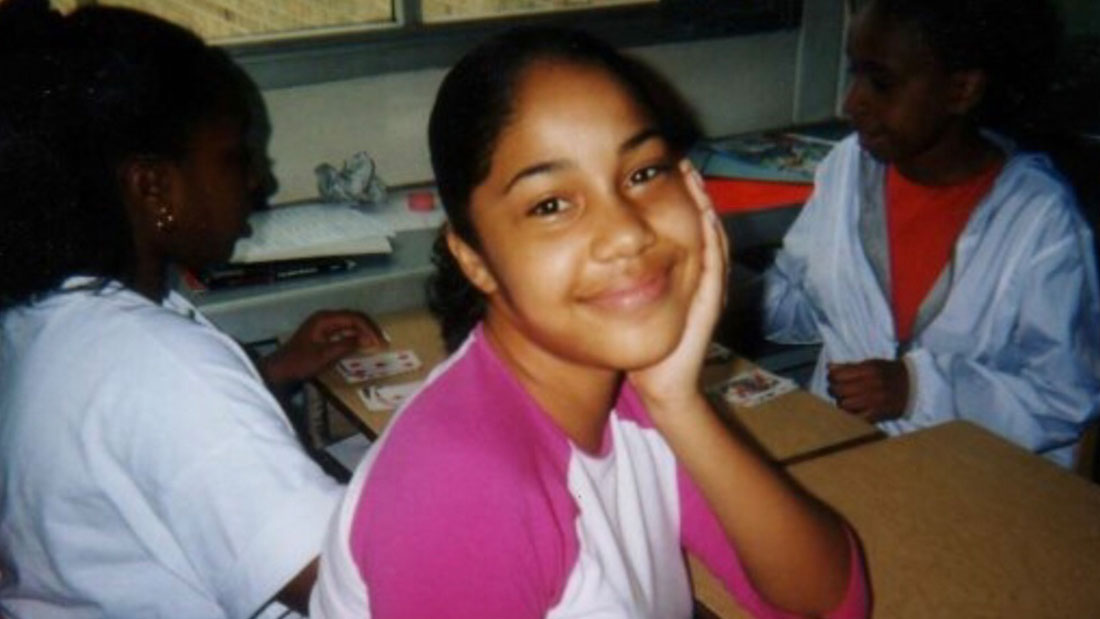 Posted at 13:26h in Family by The Funny Momma 4 Comments

All my life I had gone by Katrycia. It was a name that, unless pronounced correctly, sounded like a person who had a gold tooth, 12 inch acrylic nails and a tattoo on their hip that read “Rest in peace June Bug”. I loved what my name was intended to be but hated what it had become. Until my first year of college when I found out my “name” wasn’t actually my legal name. It was very much a Puff Daddy to Diddy or Prince to The Artist Formally Known As type of situation.  I know you have questions, so let me explain.

My parents are in no way traditional, so it should come as no surprise to hear that I wasn’t born under traditional circumstances. On my parents wedding day, my father sported a sharp black suit, crisp white collared shirt and impeccably shined shoes. You see my dad isn’t the flashy type. To this day he only wears neutral colors, but favors all shades of black. He’s a neat freak who came from a military family; meaning everything has a place and is always kept in pristine shape. My dad is a pretty quiet guy, choosing to observe everyone around him rather than divulge any details about his own personal life. He’s always been a very mysterious man, so mysterious that even my sisters and I often question whether he’s an international spy or trained assassin.

He never had to worry about being flashy because what he lacked in flair and pizzazz, my mom more than made up for.

On their wedding day, my mom rocked the hell out of a knee length, leather, halter dress with crazy feathered bangs and hair so teased that it is a miracle that she was ever able to get all the knots out. Did I mention that the dress was silver? Oh Jacqui, you were always one for the dramatics. They were not alone at the alter that day. Bonnie, who was five at the time, was there rocking a white lace dress that billowed out at the bottom and white gloves. Yeah she was cute and all, but hiding beneath my mom’s sleek, metallic ensemble was the real star of the show, little ole’ me! Waiting to bust outta that joint like the T-rex did at the end of Jurassic Park. My mom was 21 and my dad was 23 and they decided the best decision for their growing family was to make this shit legit.

Ok- now can we get back to me? Where were we? Oh yeah- the day I decided to hop on the scene and let the other “cute” babies in the hospital nursery know what a real Gerber baby looked like. Not a day goes by that my mom doesn’t remind me of the fact that I was her biggest baby. So large, in fact, that they had to cut her from “one hole to the other” just to get me out. Oh and I should mentioned that she delivered me naturally.  I was GINORMOUS. I looked like a sumo wrestler and my baby picture was a thing of nightmares. True story- my parents didn’t send out baby pictures of me until I was around four months old.

I was a blubber fish of a baby, so I guess they wanted to wait until I outgrew my ugly.

As you can probably tell by now, my parents were polar opposites. They actually still are. My dad, is calm and my mom is wild. My dad isn’t a fan of parties. My mom is the life of the party. My dad likes iced tea. My mom prefers a Bacardi and diet coke with a squeeze of lime. You get it. Ying and Yang. So when it came to naming me, it’s no surprise that my parents didn’t exactly see eye to eye. 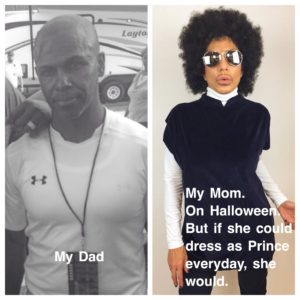 If I was a boy my parents had amicably agreed on what I think is one of the most outlandish names of life- Dax. What the fuck is a Dax? I just looked it up and it’s a city in France. A city NEITHER of my parents had been to at the time.  As a matter of fact, to this day neither one of them have ever been! Where did they even get that name from? I have no clue, but thank God I don’t have a penis. Ok so now for girl names. My father wanted to name me Karen. KAREN! Probably the most boring name in the history of names. No offense if your name is Karen, but you gotta admit… you know what. I won’t go there. I’m not the most creative or artistic of my parent’s children but Jesus Christ, Karen? Cut me some slack, dude.

Before we get to my actual name, I’d like to mention that I’m not alone in the eclectic name choice. My older sister has not one, but TWO names. Bonnie-Love. That’s literally her first name. My mom wanted to name her Bambi, but THANK GOD her parents stepped in and nipped that shit in the bud. Although she got a hippie name (like fringed vest, yellow tinted glasses, “Make Love, Not War” bumper sticker hippie name), her name is still reasonable. AND she gets to incorporate a heart into her signature. How cool is that?

My baby sister, also has an unconventional name. Zari. When my mom chose that name and people asked how she came up with it, she would proudly respond “It means beautiful in Swahili”. Now is a good time to tell you that none of us speak Swahili and my mom has never been to Africa. Regardless, Zari’s name actually meant something, so when explaining her name, she can back it with its meaning. Pretty cool.

It should come as no surprise that my mom wanted to come up with some unique name for me. As a result, she picked a name so unique that it would be mispronounced for the rest of my life. It’s almost like she found joy in the fact that I would never be able to find a tiny license plate keychain that had my name on it in any tourist shop anywhere in the world.

Here is how I believe she came up with my name. She started with a base- Patricia. Too boring for Jacqui. I get it and agree. Patricia doesn’t have enough pizzazz for me either. So my mom decided to turn one of the “I’s” into a “y”. Patrycia. Ok Jacqui, I think you’ve done enough. But no. Patrycia wasn’t wacky enough for Jacqui. She swapped out the “P” for a “K”.

So now she had the spelling down, but needed to add a little dash of Mexico in that thang. My name was meant to be pronounced “kah-tree-see-ya” and you better not forget to roll your tongue on the “r”. That worked out just fine while living in California since we were surrounded by fellow Mexicans who knew how to correctly pronounce my name. But as soon as we moved to the east coast and I started grade school my name changed for the worst. Due to the heavy Maryland and borderline southern accents my new name from pre-k through senior year of high school would forever be “kuuh-trey-sha”. FML.

So I had this unique name that no one could correctly pronounce. Thanks mom! I’d like to clarify that while I absolutely love my name when properly pronounced I absolutely hate what it turned into- kuuh-trey-sha. Even though my actual given name was Katrycia, at home, my parents and siblings called me Katryce. My dad made it up. It became my nickname and I loved it. I kept it that nickname safe at home for fear of incorporating it in to my school days and having my peers botch my beloved nickname as much as they botched my real name- kuuh-trey-sha. God I hate that.

Fast forward to my senior year in high school. It was time for me to turn in all the paperwork for college admissions and my birth certificate was nowhere to be found. In fact, my mom couldn’t remember the last time she had seen it. Um, ma’am, how did you even put me in elementary school?

Regardless, I had to obtain my birth certificate in order to actually go to college. The problem was, I was born in Santa Barbara, CA and their system wasn’t very sophisticated meaning we had to actually go to California to retrieve my birth records. Thankfully, we already had scheduled a family trip to California, so we incorporated the birth certificate mission into tour vacation. Per usual, things did not go as smoothly as we planned. Soon after we arrived at the courthouse, I saw a side of my mom that I have seen only once or twice in my entire life. It was pure rage. And it was all my dad’s fault.

We stepped up to the counter and it went a little something like this:

My mom: Hi! We need a copy of my daughter’s birth certificate *insert smile*.

My mom gave her both of their driver’s licenses. The clerk entered in the information.

Clerk: What did you say your name was again? How do you spell it?

At that very moment I came alive. Are you telling me that I was finally going to legally break free of my ghetto ass kuuh-trey-sha and finally be able to embrace my nickname as my REAL name! I wanted to shout it from the roof tops! Before I could celebrate my new found name, my mother turned to my dad and her face was beet red.

My mom: YOU WROTE THE WRONG NAME ON THE BIRTH CERTIFICATE?!?!?

My dad, aware of the giant mistake that he made, couldn’t do anything but laugh. He blamed it on the fact that he was so nervous when I was born that he wrote the wrong name on the birth certificate. Yeah, ok. You just happened to write the name that you just so happened to nickname me? Nicely played, Kevin. Nicely played.

While my parents fussed over the birth certificate dilemma, I rushed to Facebook to quickly change my name from Katrycia to Katryce. I. COULDN’T. WAIT. This prompted a ton of questions from family and friends on why I had “changed” my name to which I responded “this is my real name.”

My mother absolutely hates it when I introduce myself as Katryce. She insists that even though legally my name is Katryce, my real name will forever be Katrycia. Listen, hunny. I’m just following the law.

Since my name was such a debacle, I made sure to play it safe with my own children. My first born’s name is Craig but to make it even easier we call him C.J. Pretty much impossible to mispronounce.  My husband, Adedayo (Dayo for short), also despises the fact that no one can pronounce his name correctly so he named his first born, Elijah. Also pretty simple to pronounce. And with our third son, we decided to get a little fancy with it and name him, Ashton. Not too, too common but also very simple to pronounce. In my mind, we did our kids a solid. You’re welcome.

Any funny stories behind your names and/or your kids names?